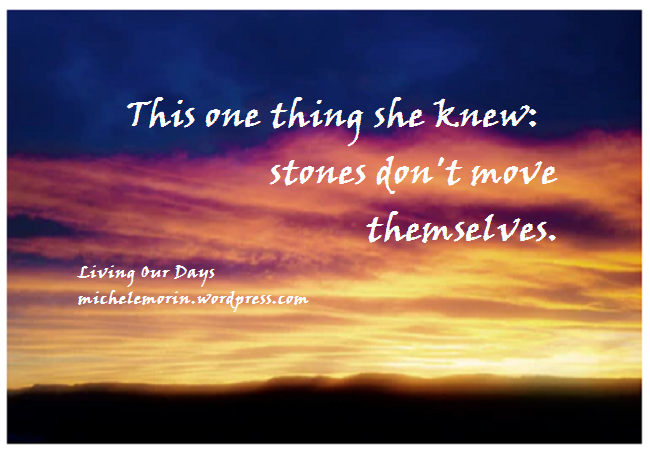 Waiting for spring, hanging off the northeast end of the U.S. mainland, it’s a challenge to get into an Easter frame of mind. The dark is still holding sway over the light, and resurrection-thinking requires a muscular faith. Although the calendar tells me that spring will come, this hope in a future date can seem like a flimsy thing.

Pressing into a Truth that challenges me to fathom the unfathomable, I leave my heart ajar to the record of resurrection in John’s Gospel. After all, Mary Magdalene had nothing but Sunday morning silhouettes to go on when she visited the tomb.

But this one thing she knew:  stones don’t move themselves.

The absence of death, the presence of angels, and the sound of her own name carried by the voice of Jesus opened Mary’s eyes to Life, and, reading it again today, my heart is blown wide open to the reality that there is a God at work Who is beyond my understanding.

The power that raised Christ from the dead spreads a layer of clear abundance across the sky, and it rebukes all my tattered scripts of scarcity and inadequacy.  Under the light of resurrection, the myth of “not enough” that presents itself as gospel is revealed for what it is – blasphemy, after all.

When I stand before a class or sit around a table with my weekly women and feel like handing off my notes to someone else and saying:
“Here, you do this. It’s too much. I’m not enough,”
I slam my heart shut like a tomb full of death.

When I reject wisdom that whispers:
“Wait; lean into relationship with Me and stop your ceaseless striving;
”When, instead, I soldier on by the seat of my pants–I choose darkness over light; death instead of resurrection.

My faithless frame of mind locks me into a small room … and then sucks out all the oxygen.

This was not unlike the post-resurrection dwelling place that the disciple Thomas had created for himself. He’d been given a whole week in which to savor the bitter brew of hopelessness and disappointment, to hear about Jesus’ appearances to others—always when Thomas was conveniently absent. He had cobbled together his own response, apparently deciding that He was not going to be taken in by all the hype. He would not be deceived by any false messiahs who go and get themselves killed in the most humiliating manner possible.

Locked door and double-bolted heart notwithstanding, Jesus showed up with a fresh supply of oxygen and irrefutable evidence—the marks of crucifixion and his own unique wound, a spear-thrust through the ribs.

Thomas’s skepticism melted into adoration and an astounding confession of faith: “My Lord and my God!”

Mary’s eyes had been opened by the sound of her Savior’s voice.
For Thomas, it was the sight of His wounds that spoke resurrection.

Millions of us now, following in hundreds of generations behind Mary and Thomas, have never been invited to put our hands on the risen Christ or been treated to the sound of His voice speaking our name aloud, and yet the reality of resurrection and the power of Life over death is so much a part of our creed that we hold it as a mark of orthodoxy. God does not require an empty “faith in faith,” but offers reality, transparent vindication in the form of eye-witness accounts upon which I base my own belief.

“Jesus of the Scars” is Edward Shillito’s poetic invitation for me to join Thomas in bearing witness:

“The other gods were strong, but thou wast weak;
They rode, but thou didst stumble to a throne;
But to our wounds, only God’s wounds speak,
And not a god has wounds but Thou alone.”

When, through Thomas’s eyes, I see a wounded God, I am brave to come, wounded, to Him, for if it were not for those visible wounds all would be winter.
The stone would still seal in the stench of death;
the door to the upper room would stay forever locked;
there would be no framing of the heart to resurrection truth.

Like Mary, though, I am seen and known.
I hear the sound of His voice through His Word:
a whispered hope,
a release from shame,
a path away from the downward draw of brokenness,
a promise of eternal spring.

Today, my family and I are beginning spring vacation (Hooray!) For a few days, things will be quiet here on the blog while we re-connect, relax, and make memories together.  May you also find joy in your celebration of resurrection life and the Savior who lives.

Subscribe to get regular Bible studies and book reviews from Living Our Days delivered to your inbox.  Just enter your e-mail address in the box at the top of this page.

I link-up with a number of blogging  communities on a regular basis.  They are listed in the left sidebar by day of the week.  I hope that you will enjoy reading the work of some fine writers and thinkers.

30 thoughts on “The Light of Resurrection”

Follow Living Our Days on WordPress.com
Join 6,047 other followers