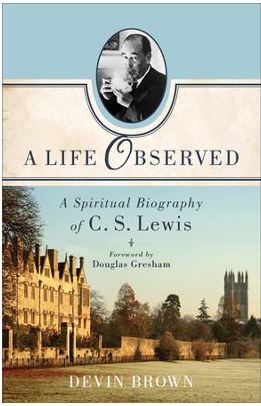 I first met C.S.Lewis in the back seat of a  1970’s era hatch back careening non-stop from Maine to Georgia.  Like the young man who owned the car,  I was on my way to college.  Unlike the driver, I was not interested in the young lady in the passenger’s seat.  Since the driver’s boxed set of Lewis’s Chronicles of Narnia was piled atop an open box of random possessions; since I was socially awkward and much more interested in books than in people; and since it was apparent that I would not be missed in the conversational flow, I slid a book out of the worn case and disappeared through the wardrobe door.

That was thirty years ago, and my own boxed set of Chronicles paperbacks has become worn through multiple read-alouds to my four children, and it rests beside most of C.S. Lewis’s other books as well as a number of Lewis biographies.  Thus, when I received Devin Brown’s contribution to the genre, A Life Observed — A Spiritual Biography of C.S. Lewis, my first question was: “Do we really need another C.S. Lewis bio?”  Anticipating the question, Brown goes to great lengths in defining what his work is NOT in order to set it apart from existing efforts at capturing the life of Lewis.  He follows the lead of Lewis’s Surprised by Joy, but not slavishly, and delightfully weaves his biographical data with literary analysis of many of Lewis’s works, following the journey of a contented atheist away from materialism, through idealism, into theism, and “kicking and screaming” into Christianity.

Happily, Brown reported on some details of Lewis’s life which I had not read elsewhere:

It was delightful to read again about Lewis’s circle of friends and their influence on his life and writing.  It was inspiring to remember that the crusty old bachelor whose dearest wish was to “be able to call his soul his own” ended up sharing his soul with millions of readers in a manner that spans generations and decades.  It was heartening to witness Brown’s depiction of the sheer force of will that went into Lewis’s walk with God.  Grabbing his bootstraps and planting himself in a pew each week in order to “fly his flag” as he believed he should, Lewis demonstrated Mere Christianity as well as writing about it.

5 thoughts on ““This Is Not THAT Kind of Biography””

Follow Living Our Days on WordPress.com
Join 6,062 other followers