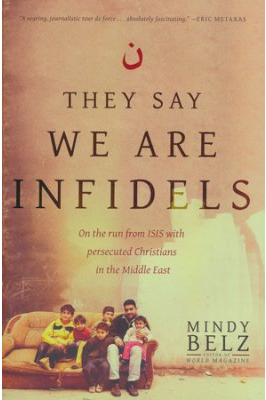 In an effort to understand the heart of a nation, journalist and World Magazine editor Mindy Belz spoke to its people.  To connect the dots between ancient civilizations, a modern-day dictator, and a political force that operates with fiery religious zeal, Mindy joined forces with an Iraqi-in-exile, Insaf Safou, with whom she learned and followed the path of dreaming and waiting — while letting no grass grow under their feet!  Insaf’s concern for the displaced Christians of Iraq keeps her returning to her homeland with offerings of love and gifts of cash for basic necessities of life, thus introducing Mindy to the unseen and under-reported drama that forms the narrative of They Say We Are Infidels.

Mindy’s travelogue unfolds in twenty-one chapters, each of which could stand on its own, and she documents a breath-taking array of pandemonium:  life in big-city Baghdad with unreliable electricity and insufficient supplies, a flight from danger with fifteen people stuffed into a mid-sized vehicle, a Caesarian section performed because there’s no time for normal labor and delivery when the world is falling apart. When the stated choices are leave, pay the penalty to stay — or be ready to die — people flee by the thousands.

With twenty years of journalistic experience, it is no surprise that Mindy’s account of  post-Saddam Middle East is anchored in historical fact and political backstory, while at the same time being deeply disturbing.  Public displays of violence toward Christians are reminiscent of Nazi Germany’s pogroms against European Jews, and the message is clear:  Christians are no longer tolerated, and funded by seized assets gained through door-to-door looting, ISIS is in a position to carry out its agenda.  Kidnapping children, selling them into slavery of all kinds, destroying churches, interrupting every normal function of life with their sweep of violence, ISIS moves freely through the Middle East, destroying and eliminating the nine years’ worth of gains won by the United States military.

Mindy helps her readers to understand the complex “tug of blood and history” that keeps a people group hanging on in hope while Christian villages continue to empty:  spiritual roots that go back to the time of Jonah, a vibrancy of culture that spans centuries, and a fellowship of faith that is incomprehensible in the face of our Western tendency to remain scattered strangers in spite of shared church affiliation and weekly worship.  This is not a pleasant or comfortable read, and I found myself identifying with Mindy as she compared her safe, secure, party-planning and cake-baking years with the experiences of women attempting to raise children and preserve a way of life in a land that was home to 1.2 million Christians in 2003, but had hemorrhaged down to an anemic 500,000 by 2011.

Although I read voraciously, I have remained largely uninformed about the danger and the destruction that has become the new normal to Middle Eastern families.  Reading about the efforts of self-funded volunteers who risk their lives and resources to make a small difference, witnessing the fragile light of those believers who choose to stay in their homeland in hopes of helping through educational and humanitarian efforts, I realize that my ignorance is a luxury the world cannot afford.

One church in Indiana raised sixty thousand dollars to assist a struggling body of believers that fled Mosul in 2014.  Their generosity provided eighty families (that’s around 250 people) with rent assistance for six months.  Could it be that the solution for Iraq will be “not by troops and killing people, but by healing,” through acts of generosity and self-giving that sustain and carry hope?  In the strength of her calling, Insaf continues to travel to Iraq, where her efforts are compounded with fasting and prayer and fueled by words from the prophet Micah:

The Lord is coming out of his place,
and will come down and tread upon the high places of the earth.
And the mountains will melt under him,
and the valleys will split open,
like wax before the fire,
like waters poured down a steep place.

Insaf believes that God will melt the power of ISIS.

So, while churches continue to be bombed, pastors continue to be murdered, and families continue to be torn apart through kidnapping and refugee-living, the challenge comes forth:  persecuted Christians need “rent money, concrete floors, schools and backpacks . . . They need dignity too.”  They Say We Are Infidels is a challenge to join Insaf and her friends in action and in fervent and well-informed prayer, that the fire of persecution will become “like cold water, cooling them, helping them . . .”

This book was provided by Tyndale Publishing in exchange for my review.  I am disclosing this in accordance with the Federal Trade Commission’s 16 CFR, Part 255 : “Guides Concerning the Use of Endorsements and Testimonials in Advertising.”

Subscribe to get regular Bible studies and book reviews from Living Our Days delivered to your inbox.  Just enter your e-mail address in the box at the top of this page.

27 thoughts on “On the Run from ISIS”