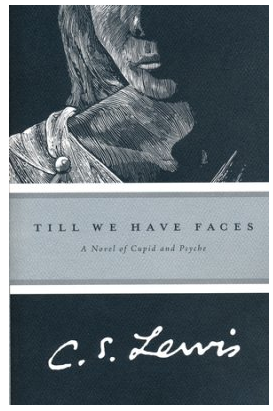 Today we come to the end of Part I!
With only four chapters remaining in Part II, I’m amazed at how quickly the time for this discussion group has flown!

Queen Orual has plowed into her new role with gusto, handily defeating Prince Argan with her sword, celebrating her victory as a lone woman in a place of power among men, and then settling into the routines of running a kingdom.  Her identity as the ugly princess is continually being swallowed up into that of the mysterious, veiled warrior Queen who leads her soldiers into battle and implements far-reaching economic and social reforms.  Even so, Orual is there behind the veil, haunted by grief and weighted down with the futility of a life devoted only to a dutiful completion of the day’s round of tasks.

A long recreational journey alleviates Queen Orual’s restlessness and brings something close to joy — until she stumbles into a secluded temple and learns that the story of the goddess who “resides” there is based on the story of Psyche with some important changes in the narrative details that settle once and for all Orual’s conviction that the gods hate her.  She resolves to set the record straight by writing the story from her own perspective and by bringing before the gods her charges against them for their injustice.

Orual is a brilliant leader, and part of her brilliance lies in recognizing the importance of tapping into the wisdom of her counselors, Bardia and the Fox.  In her own right, however, she is enthusiastic, progressive, and a lover of justice, so even though there is no joy  or satisfaction in it for herself, Orual rules well. Lewis’s friend Screwtape would grudgingly admit that his Enemy (God) would be pleased with this human who does what is required, day after day, purely from a sense of duty.

Her veil, the “treaty made with her ugliness,” serves her well as a tool of intimidation and also advances Orual’s disappearance into the identity of The Queen.  All the grief, unhappiness, and bitterness can go on behind the veil while The Queen soldiers on, keeping up appearances.  She speaks with strong verbs that unmask her self-hatred, saying that she will kill Orual (225), that she has “locked Orual up” and “laid her asleep as best [she] could” (226).  As Orual’s face is lost to the world, queenship becomes her new face.

As with any addiction meant to deaden and smother pain, Orual’s ceaseless work and her string of accomplishments don’t satisfy her for long.   Her longing for the slaking of thirst and the old memory of satisfaction comes through clearly (and poignantly) with these words:

“Oh, for that bowl of milk, drunk alone in the cool dairy, the first day I ever used a sword.”

Some Issues to Ponder

Desperate to gain some relief from the sound of wind-blown chains that sound like Psyche’s weeping, The Queen builds a formidable stone wall around the well. Later, she refers to this building project in the same breath as triumph in the Battle of Essur (235).

“I heard Psyche weeping no more.  The year after that I defeated Essur.”

The Queen may have succeeded in walling up grieving Orual, and she may have felt powerful in the face of what she perceived to be  a “weakened” version of Ungit who smelled “cleaner and less holy” (234).  She may even have been rich enough and broad-minded enough to contribute silver to the temple for the fashioning of a new replacement for the “old, hungry, faceless” Ungit.  However, it was not long before she discovered that the gods were clearly at work behind the scenes, striving to have the last word.

Remember:  Orual had told NO ONE that she had seen Psyche’s palace.  Imagine her horror when she heard in the sing-songy repetition of the “gods’ version” of her story that it included the detail that the sisters had seen the palace and, yet, still enticed their sister away from her husband.

Orual had learned on the banks of the river near The Tree, when she saw the god’s face and experienced his power:   The god of the Grey Mountain is “no tame lion.”  Moving into Part II in which the Queen plans to argue her case against the gods,  it seems certain that we’re in for some sorting of the truth and revealing of motives:

“Let no one lightly set about such a work.  Memory, once waked, will play the tyrant . . . The past which I wrote down was not the past that I thought I had (all these years) been remembering. (253)

These are cautionary words for us as well, for it is God who writes our story and it is His prerogative alone to “set the record straight.”

Some Issues to Ponder

If readers in the U.S. are busily completing tax forms, Orual’s attitude about her sacrifices to Ungit may have struck a chord with you.  She considers the task burdensome and the temple requirements to be an odious chasing after the prosperity of others.  Whatever we might think about the demands of the IRS, we know that whatever we give to God is simply a return of what is already His in a glorious affirmation of our free will and of our design for worship.  Sadly, this is not the case in Glome.

Orual’s heaviness and gloom reminded me of the writings of Paul the Apostle who did not lose heart — whatever hardships he endured — for he considered every difficulty to be light and momentary when weighed against the “exceeding and eternal weight of glory.”  In Chapters 19-21, The Queen has her own tragic system of measurement.  On one side of the balance scale rest the adulation of the people of Glome, her huge impact for good, and all the daily doings that go into the management of  a kingdom.  They land, in her estimation, like feathers on the scale when weighed against the howling wasteland of a life without Psyche, of a relationship of cool professionalism with Bardia, and the piercing loneliness of an existence in which, in her own words, “one little stairway led me from feast or council, all the bustle and skill and glory of queenship, to my own chamber to be alone with myself — that is with a nothingness.”

We live an a world full of Oruals who keep themselves busy and fill their lives with stuff and accomplishments in order to quiet the questions and mask the ache of longing.  This ending to Part I leaves me feeling sad for our main character and her present-day sisters — and wistful about finding a way to share the hope Paul wrote about, “the light of the knowledge of the glory of God in the face of Jesus Christ” which gave him the ability to view this world with its trials as light and momentary, which indeed it is.

I would love to read your thoughts on this section — or on Part I as a whole.  Join the conversation by linking up a blog post or by commenting below.

On Thursday, March 2, I’ll be here having read Chapter 1 and 2 from Part II.

31 thoughts on “Long Live the Queen! Till We Have Faces Discussion Group Week 8”

Follow Living Our Days on WordPress.com
Join 6,061 other subscribers