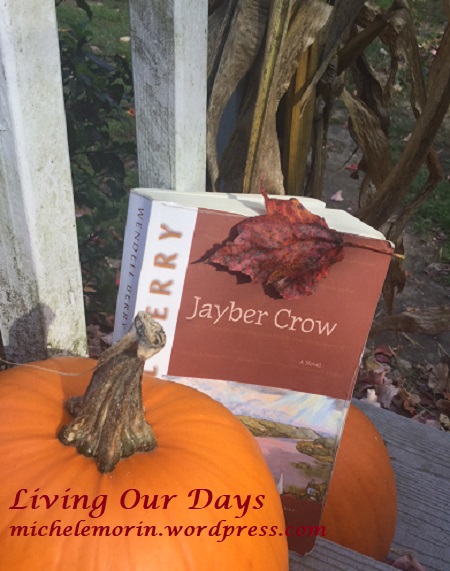 Last week a huge windstorm felled both trees and power lines, leading to widespread power outages throughout the great state of Maine. By some miracle of grace, we came through the storm with our lights still burning, but my oldest son was without electricity for several days. Since he and his family came here to shower and do laundry, I invited them to stay for supper. This time with much-loved family (and time to hold my baby granddaughter and visit with the adorable grandson) felt like bonus-time, completely unexpected, and owing to something that was a trial for them, but the end result was a gift to me.

Loving adult children seems to require a measure of this kind of blessing management — a rejoicing in the unsought gift of their presence while holding it all loosely and without expectation. I would rather pine endlessly for my sons than be the nagging and needy mother, so when these serendipitous visits happen with no real planning on my part, it’s a source of joy — or as Jayber Crow would say:

” . . . these meetings must not be planned, expected, depended on , or looked forward to. They [are] a hope seen afar, that must be with patience waited for.”

A Book About Love

And so, Jayber found that he also was able to practice blessing management in his happenstance meetings with Mattie in The Nest Egg over the course of 14 or 15 years. In this respect, then, it seems as if  Jayber Crow is a story of how one man learned to love. He denied himself any expression of that love toward its object (other than his immediate and generous response to Mattie’s requests for help in difficult situations). However, his outflow of love toward the Port William membership can certainly be traced back to the commitment he made to Mattie, and, therefore, a commitment to remain as The Membership’s “married ineligible bachelor barber.”

Several chapters ago, Jayber remarked that Port William would break your heart if you let it. I wonder if that is true of any community if only we would  be willing to see the neediness that lies only just beneath the glossy surface. Perhaps Jayber’s commitment is an invitation for the jaded and the “been-burned” to begin handing out second chances to family, friends, community, or the church.

When Jayber reflects on the benefit of this sacrifice to himself, asking himself what possible good he could have derived from the arrangement, his response is deeply moving:

“What good did I get from it? I got to have love in my heart.”

Listen well, O, my soul, for herein lies much wisdom for loving without strings attached.

A Book About Belonging

This outcome of Jayber’s internal argument is consistent with his value system expressed elsewhere in the story. For instance:

“To love anything good, at any cost, is a bargain.”

One of the places Jayber came to love and feel connected to was The Nest Egg because “everything there seemed to belong where it was.” (346) Unlike Troy, he did not have to possess something in the traditional sense in order to enjoy it. Although they were never his, the Nest Egg, the little cabin Burley gave him “the use of,” and even Mattie were all a source of joy. They also anchored him in a community which gave him his first (and only) set of roots since he was orphaned for the second time as a boy.

A Book About Calling

In his informal role as the “bootleg” barber at the edge of the river, Jayber continued to receive the words and confidences of his customers “as water draws to low ground.” For Jayber, it seems as if the minute he stopped trying to “make something of himself,” he became what he was intended to be.

It’s hard to miss the continual contrasts between Jayber and Troy who never did cease trying to make something of himself (336, 341). I wonder if some of the ceaseless striving came because he required so much fuel from outside himself in order to feed his voracious ambition.

Jayber’s calling that transcends even barbering is his love for Mattie, the wife of another man.  Even so, he makes no effort to interfere with the marriage. He never tells anyone else about his love for her, and the “marriage” he initiates in his heart changes him to the core.

A Book About Ending Well

There’s a phrase that occurred earlier in Jayber Crow‘s meanderings and with its second mention, it continued to gnaw at me. I’m thinking about “the leftovers.” In spite of his efforts to avoid living “an unexamined life,” Jayber still had some leftovers (355) which he defined as the “things I might once have done that are now undoable, old wrongs, responsibilities unmet, ineradicable failures — things of time, which is always revealing the remedies it has already carried us beyond.”  He has borrowed the term (268) from our friend Della, Athey Keith’s widow, and it was these “leftovers” that brought her to tears after Athey’s death:

These are cautionary words from fictional characters from whose story arc I want to learn and benefit.

Jayber calls himself a man of faith even though “faith puts you out on a wide river in a little boat, in the fog, in the dark.” (356)  Faith does not exempt the faithful from pain, Jayber says, but assures that “there is a light that includes our darkness, and day that shines down even on the clouds.” (357)  Faithfulness, for Jayber, is not about getting something for one’s efforts but is in itself its own reward.

It is not until the last paragraph of the book that we see any ray of hope for Jayber’s heart in his poured out life, and I can’t resist sharing his words of longing for this “good-good-good” life:

May I ask, when is the last time you read a novel in which the culmination was a chaste and selfless love? In fulfillment of I Corinthians 13,  Jayber’s love “suffered long,”  did not “seek its own,” as it “hoped and endured all things” rather than allowing the weight of his desire to crush the beauty of its object. With the careful paintbrush of a poet, Berry suggested rather than described the understanding between Jayber and Mattie in the book’s final paragraph, and I expect (because, I ask you, who can resist thinking about a fictional character’s life beyond page 363?) that Jayber lived the rest of his days with the memory of that “smile that he had never seen.”

This is a bittersweet moment as we come to the end of our discussion. When I’m in the middle of a series, I am convinced that I’ll never survive to the end and make all kinds of rash vows that include the words “never again.” I guess I’m a little bit like Jayber with the hands of my clock permanently pointing at 6:30, keeping things open-ended. However, I’m already starting to think about books for the next round, so stay tuned!

As ever, be sure to share links to any blog posts you write on Jayber Crow or related topics, especially if you decide to throw caution to the wind and write about “texts” and “subtexts” you’ve found, or if you attempt to “explain, interpret, explicate, analyze, deconstruct, or otherwise ‘understand,'” because then we can all be exiled together and enjoy “the company of other explainers.” Wherever the exile ends up, I’ll bring a thermos of English Breakfast Tea and some disposable cups.  See you there!

Many thanks to all who persevered to the end! It’s been a great experience to spend some time as honorary citizens of Port William with you!

I link-up with a number of blogging communities on a regular basis.  They are listed in the left sidebar by day of the week.  I hope that you will take a moment to enjoy reading the work of some of these fine writers and thinkers.

Follow Living Our Days on WordPress.com
Join 6,061 other subscribers