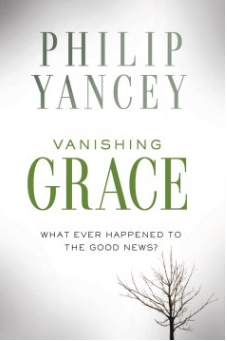 “Like a sudden thaw in the middle of winter . . .”:  this is Philip Yancey’s descriptive metaphor for grace on this fallen planet. “It stops us short, catches the breath, disarms.”  Vanishing Grace was written out of Yancey’s concern that the church is failing to demonstrate the warm and compelling grace of God.  As a result, the tendency of those outside the church is to view Christians as “bearers of bad news, not good news.”  He documents this trend in Part One of Vanishing Grace.  As evidence, he presents conversations with unbelievers from around the world, statistical data, and shattering examples of situations in which Christians have been part of the problem rather than part of the solution.  He calls believers to “a different sound” in which we demonstrate to the world that the good news of the gospel is, in the words of Frederick Buechner, “gooder than we ever dared hope,” and that God’s call to salvation is a call to a broad and spacious place — not the cramped quarters many believers seem to occupy.

Part Two sets forth models of three groups of people who seem to be more adept at communicating grace to the culture:

(1)  Pilgrims:  Every Christian is a pilgrim; i.e. on a journey of faith.  No one has arrived, but there is a tendency among Christians to regard others from a pinnacle of superiority.  Here, Yancey demonstrates a characteristic of his writing which I find to be most compelling:  he is widely read and quotes broadly from a number of authors, genres, and historical contexts.  (I always come away from reading his books with a list of authors I want to sample.)

(2)  Activists: Expressing their faith by their deeds, activists kick the traces out from under the most common complaint against Christianity:  hypocrisy.  Vanishing Grace reframes Jesus’ question to His disciples on the day of His ascension.  “Why do you stand here looking into the sky?”  As the “agents assigned to carry out God’s will on earth,” believers must avoid the trap of expecting “God to do something for us when instead God wants to do it through us.”  Scriptural truth is best lived out from hand [practical acts of mercy], to heart [expressions of love],  to head [Truth about the Source of that love].

(3) Artists: Those who skillfully represent  beauty and reality are able to speak into the human condition with sensitivity in a way that is truly heard.  He likens the creative arts to goads, which create enough discomfort to motivate people to action, and to nails which sink deeper and leave a lasting mark.  The challenge for the Christian artist is in finding the balance between propaganda and art.

In Part Three, Yancey looks at Christianity as it stacks up against other springs from which people seek to quench their thirst for truth.  As it happens, the Christian’s strongest argument for the truth of the gospel is in demonstrating how it works in one’s everyday life.  Therefore, ironically, the kingdom of God “largely exists for the sake of outsiders, as a tangible expression of God’s love for all.”  As we fail to provide that visible reality, we also fail to provide moral guidance and hope to religious skeptics.  Yancey deals specifically with the answers that lie beyond science in three chapters that pinpoint:

1.  The God question:  Is there anyone else?  [Hint: What or Who lavished such gratuitous beauty on our planet?] 2.  The human question:  Why are we here?  [Hint: God wants you to flourish, but this has nothing to do with having your own way.]

3.  The social question:  How should we live?  [Hint: Christians will bring clarity to moral issues only if we “listen well, live well and engage well with the rest of society.”]

Finally, in Part Four, Philip comes back around to the pilgrims, activists, and artists to demonstrate that believers can and should be functioning in the world as something more than just a voting block — or worse, a stumbling block. To provide that needed “community of contrast” the prayer of the church should be:

Lord, teach us how to be a “counterculture of ordinary pilgrims who insist on living a different way.”  May we “admit that we are needy and look to God for both vision and strength to subvert the world.” Show us how to be activists who live out our beliefs “against the grain of surrounding culture.”  May we shout for the hard-of-hearing and draw large and startling figures for the almost-blind. Help us to enter into the “attitudes, feelings, and total experience of” the receivers of our art.  As artists, may we be like You, rendering the “full spectrum of doubt and faith, struggle and resolution, sin and redemption.”

When Christians present a “shining alternative” to evil, the grace of God will become visible and will sound like good news to ears that need to hear the truth.

Disclosure:  This book was provided by BookLookBloggers in exchange for my unbiased review.

Follow Living Our Days on WordPress.com
Join 6,064 other subscribers