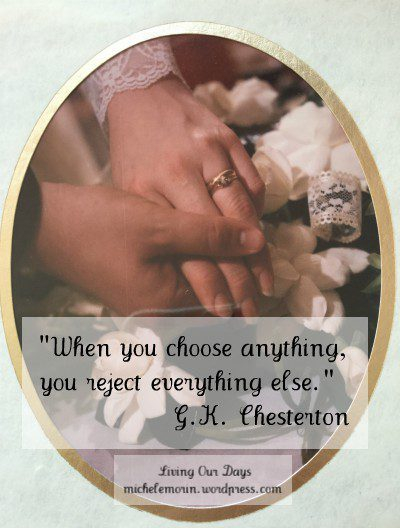 On my left hand, I wear the symbol of a choice I made 29 years ago. When I said yes to the union that was forged between my husband and me on that day of satin and lace, I was also saying no to a thousand other things, and this is the nature of choice. By making any choice, I accept the limitations that go with it.

Heroes of the faith like Wycliffe and Bonhoeffer made costly decisions to pursue the will of God even though it clashed (and ultimately collided) with the power structures of their times. More recently, civil rights activists who willed themselves into identity with a minority were prepared to accept the limitations imposed upon them:  ridicule, social censure, jail time, or even death.

In Chapter 3 of Orthodoxy, G.K. Chesterton defines human will or volition as the act of “choosing one course as better than another.” (62) He meanders into the matter of choice in the context of his ongoing disagreements with H.G. Wells and George Bernard Shaw and their kin, but the alarm and scorn he directs toward their exaltation of the human will seems wildly relevant a hundred years later.

Isak Dinesen described a man (in Out of Africa) who would not “strive toward a happiness or comfort which may be irrelevant to God’s idea of him.” When an individual’s will becomes an end in itself, it becomes an idol. Chesterton referred to this as the “worship of will,” and, apparently his adversaries had overlooked the limitations that come with freedom, for “when you choose anything, you reject everything else.” (63)

Early 20th-century will-worshipers may have purposefully sidestepped the notion that it was God who conceived of freedom of the will for humanity in the first place. When He granted “the dignity of causality” (Pascal’s phrase, not Chesterton’s), this was in keeping with our creation in His glorious likeness. Then, the entire narrative arc of Scripture follows as a record of God’s working His divine will through the exercise of the free will of a rag-tag assortment of men and women who, at times, gave every indication that they had not an inkling of “God’s idea of them.”

If “every act of the will is an act of self-limitation,” (63) this rings true even for the Almighty. God’s sovereign choice to confer upon us the gift of free will set limits around His own freedom:

Even in the flesh, Jesus worked miracles through acts of human collaboration at His request:  fill up a water pot, extend a hand, distribute a torn up loaf of bread. He despaired over the faithlessness of whole communities and let their unbelief turn the holy spigot of blessing to the off position.

When I’m tempted to lament my own unwise choices or to fear the gift of free will in the hands of the inexperienced young men I love, let me first remember that the claustrophobia of limitation is only a corollary to the glorious freedom that is ours in the first place: We are free to make mistakes and to learn from them, to sin and be forgiven and then to start over.

Second, may I live toward a boldness that, in Chesterton’s words, is able to “choose a path and go down it like a thunderbolt.” (69) This was the way of Christ when He aligned His power of choosing with the Father so that, in maturity of faith, He was able to choose the cross, and in despising the shame, to accept the limitations of that choice without regret.

Thank you all for reading along,

P.S. Linda, my friend and fellow reader in this year of Orthodoxy, has written a great post on Chesterton’s response to this question: “Well, if a man is not to believe in himself, in what is he to believe?”  Chesterton’s thoughts on self-confidence may be even more relevant today than ever. Click here to enjoy Linda’s summary and her own visceral response to his words.

I  am a participant in the Amazon Services LLC Associates Program, an affiliate advertising program designed to provide a means for sites to earn advertising fees by advertising and linking to Amazon.com. If you should decide to purchase any of the books mentioned in this post,simply click on the title here and you’ll be taken directly to Amazon. If you decide to buy, I’ll make a small commission at no extra cost to you:

Michele Morin is a teacher, blogger, reader, and gardener who finds joy in sitting at a table surrounded by women with open Bibles. She has been married to an unreasonably patient husband for thirty years, and together they have four sons, two daughters-in-love, three grandchildren, and one lazy St. Bernard. Michele loves hot tea and well-crafted sentences, poems that stop her in her tracks and days at the ocean with the whole family. She laments biblical illiteracy and advocates for the prudent use of “little minutes.” She blogs at Living Our Days, and you can connect with her on Facebook or Twitter. View all posts by Michele Morin

56 thoughts on “The Freedom of Limitations” 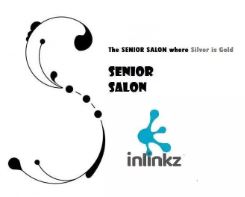 Here’s what I’m reading these days: